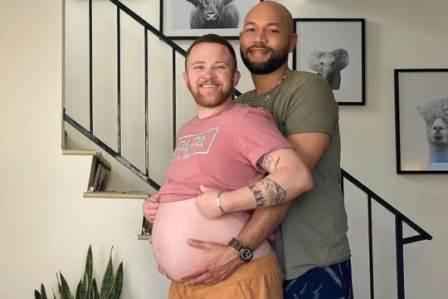 Since the improvement in science, we get to see many strange things about which people usually do not see or hear. For this reason, the way people think and understand is old. Recently something similar happened with a transgender man living in America.

Actually, the person surprised everyone by giving birth to his son, but people started calling him the mother, not the father of the child! The man was deeply hurt by this and he vented his anger fiercely. 37-year-old Bennett Kasper William, a resident of Los Angeles, is a transgender man.

She was a woman till 7 years ago when she got her breast surgery removed by spending more than 3,998.35 US Dollar. But Bennett did not change his female private part because he wanted to enjoy the pleasure of becoming a mother. In the year 2017, he met a man named Malik. When both fell in love with each other, they decided to take forward their family.

In the year 2020, she gave birth to her son Hudson. Recently, Bennett shared about a strange experience during childbirth and took out his anger on social media. According to the Daily Star report, Bennett said that people in the hospital started calling her the mother of the child instead of the father of the child.

Talking to Daily Mail, she said- ‘We have to separate motherhood and womanhood. We have to understand that any person who can give birth to a child is a mother, there is motherhood in him. Only women can not become mothers.’ More than 20 thousand people follow Bennett on Instagram who always support him.