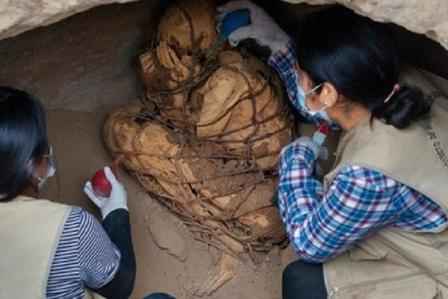 Somewhere in the world, some such incidents happen which we feel strange but such incidents become a topic of discussion among people. These days, a team of geologists in Peru has found a mummy which they say is about 800 years old. A team of geologists has found a mummy about 800 years old off the central coast of Peru. Archaeologists have given surprising information about this mummy.

According to experts, about 800 years ago a dead man was mummified and buried on the central coast of Peru. Along with this, his body was wrapped and tied with special clothes. His hands were tied over his mouth with a rope. Not only this, his feet were also tied. Seeing this, it was as if he had been tied in a sitting position.

Peter van Dalen Luna, an archaeologist involved in the excavation, said that the gender has not yet been identified whether this mummy is of a man or a woman, but its age may have been between 25 and 30 years. During the excavation, archaeologists have found many types of items with this mummy. This includes everything from utensils to rotten vegetables. Apart from this, stone tools have also been found along with the mummy. It is being told that the mummy that has been taken out of the pit must have been a resident of the High Indian region.

At present, information is being collected about the things found with the mummy. Researchers are now studying the tomb and the mummy to find out what the mummy has to do with the tomb. Was his last rites performed in this or later his body was kept here as a mummy.