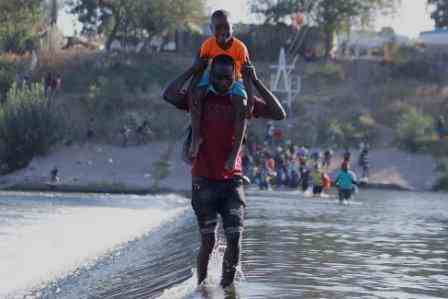 Texas U.S.- The Department of Homeland Security said Saturday it has ramped up deportation flights to Haiti this weekend amid an increase in migrants at the border in Texas. “DHS will secure additional transportation to accelerate the pace and increase the capacity of removal flights to Haiti and other destinations in the hemisphere within the next 72 hours,” the DHS said in a statement. The announcement came on the same day more than 50 Democratic lawmakers urged the Biden administration in a letter to halt deportations to Haiti. The leaders asked to focus instead on humanitarian relief in the aftermath of the assassination of the country’s president, Jovenel Moise, in July and a 7.2-magnitude earthquake last month that killed over 2,000 Haitians. The impoverished Caribbean country is also still recovering from the 7-magnitude quake on Jan. 12, 2010, that killed at least 100,000 people. The deportation flights are the third part of President Joe Biden’s six-part strategy to address the surge at the border bridge between Texas and Mexico, which includes thousands of Haitian migrants. (UINEWS)