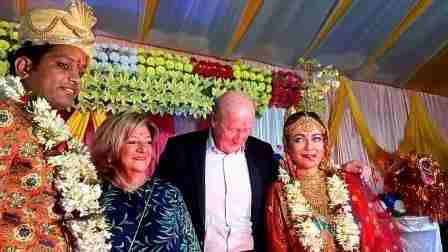 India- (Begusarai, Bihar): It is said that if love is true, then all boundaries are broken. One such case was seen in Begusarai, Bihar, India when a girl from France across the seven seas reached Begusarai in Bihar for the sake of her true love.

He took seven rounds with his lover with the promise of fulfilling seven births according to the rituals. Now this marriage has become a topic of discussion in the whole region.

In fact, Marie Laure Hiral, a resident of Paris, France, had come to India about six years ago and at the same time gave her heart to Rakesh, who was working as a tourist guide. After this, he got both Rakesh and Bharat (India) in his heart.

Rakesh, son of Ramchandra Sah, resident of India of Katharia village of Begusarai, used to work as a tourist guide while living in New Delhi at that time. It was during this time that the two met. After this, Mary may have gone to her country, but both of them kept talking and then both of them also expressed their love on the phone.

Paris businessman Marie called Rakesh Kumar to Paris three years ago and together they started doing cloth business there. During this, both of them understood each other more and then decided to get married.

Rakesh’s father Ramchandra Sah told that Mary was so impressed by India that he decided to come here and get married. After this, with the consent of both the families, on Sunday, Mary and Rakesh tied the knot with Vedic chants. Mary’s family members also came from France in this marriage. After tying the knot, both the families congratulated and congratulated the newlyweds.

The family told that this marriage has taken place according to the entire Hindu customs. The entire family remained united in Jayamala (Garland), while other rituals were also performed. The bride’s family also danced fiercely on Hindi and Bhojpuri songs at the wedding.

According to the family, both the families are happy with this marriage. During this, foreign guests fiercely enjoyed the civilizational culture of Bihar (state in India), and also danced. Foreign guests are planning to stay in India for a week now.

Rakesh’s family says that Mary wanted to come to get married in a small town like Begusarai to see the culture and civilization here. After this both the families together made plans for this marriage. Relatives say that the newly married couple will stay in India for a week and return to Paris (France) again.