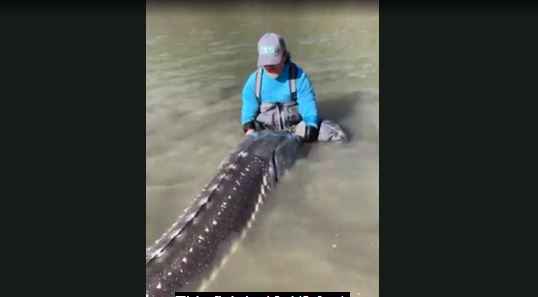 Two people who went fishing in Canada’s Firasar River got such a thing in their hands, which they were surprised to see. Actually, a fish weighing about 270 kg was trapped in the nets of both the fishermen. Its name is Sturgeon fish, which is also known as Living Dinosaurs i.e. Living Dinosaurs.

British Columbia’s Yves Bisson and angler Dan Lalier went fishing. During this, he saw a huge fish jumping in the water. As soon as he took it out, he was shocked, because he had caught the Sturgeon fish, which is a very rare fish.

Bisson says that the fish was about 11 feet long and its weight ranged from 250 to 300 kg. A video of the fish has also surfaced, which has been posted on Twitter under the name Now This News. For the time being, he left this fish back in the river by tagging.

Also read:- First lunar rovers in decades may explore the moon in 2022