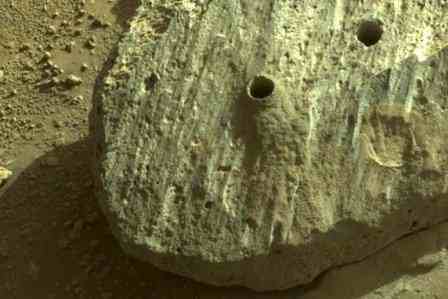 ORLANDO, Fla.- The first two rock samples examined by NASA’s Mars rover Perseverance give scientists a firm belief that water inundated Jezero Crater for a sustained period of time, the agency announced Friday. “We determined salt granules in the rock indicate it was exposed to water,” Julia Goreva, a NASA scientist for the rover program, said in a news conference from the Jet Propulsion Laboratory in Pasadena, Calif. The rocks, drilled Monday and Wednesday, came from an igneous or volcanic rock. The agency previously knew that water once filled the crater, but not for how long. The salt deposits mean NASA can now rule out a sudden “flash in the pan” water event, the agency said in a news release. (UI NEWS)