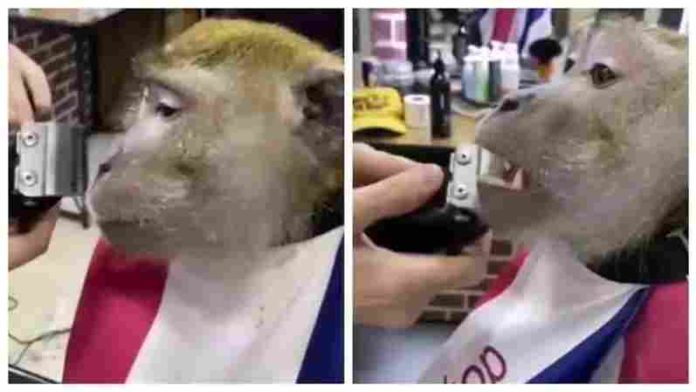 Where on the one hand a person goes to the hair salon to look beautiful and gets different types of hairstyles and beards, on the other hand, monkeys have also joined the category of beards. Yes, we are talking about monkey only.

Monkeys are said to be the ancestors of humans. All their actions are also similar to those of humans. Not only this, the hobbies of monkeys are also like that of humans. This is the reason that whenever their videos become viral as soon as they come on social media.

Seeing these videos, where we are surprised many times, at times some videos also come like this. Seeing whom we cannot control our laughter. One such video has surfaced in recent days. In which the monkey is seen sitting on a chair and getting shaved by the barber. People are not able to live without commenting after watching this video.

Actually, a video of a monkey is going viral on social media, in which he is seen getting a beard in the salon. We are sure you must have been surprised after reading this, but it is true. As a proof, we have a video of it, after watching it you will be convinced. The clip was posted on Twitter by Indian Police Service officer Rupin Sharma and has garnered over 1,000 views online.

In this video going viral, the monkey is seen sitting in front of a mirror with a sheet wrapped on a chair. The barber first combed her facial hair and then started trimming it with an electric trimmer. In the video, the monkey is seen sitting very peacefully and the people present there are also watching him with great love and are also recording his video. Rarely have you ever seen a monkey in the salon before, people are liking this video so much that they are sharing their reaction.